This week we invite you to meet other participants in pairs or small groups.

You can use this thread to find others and coordinate, feel free to ask questions!

I’m Carlos Kablan, from Brazil. I ive in São Paulo. Should anyone be available to chat, you can reach me out via WhatsApp:

Me too… meeting up has kept me sane through the past two years. I host a puppet improv meet up 5 to 6:30 every other Wednesday EST. Let me know if you’re interested in joining in.

Today I had a meeting with @JayElf and @MissMissShelly over Zoom, and it was great!

One of the things we did together was to change the prompt of this activity. We realized that the previous prompt of “meet someone” was too vague and could make people feel lost, so we rephrased it and made it a bit more concrete by giving examples of things to do / discuss, and suggesting more places to interact (besides video calls).

I generally love working with friends on the same project (that’s how I get things done), but I’m particularly amazed by the process of collaboratively writing and revising a text, because you can clearly see how the sentences improve at every suggestion through an iterative process of quick negotiations.

This might be a little tangent, but it actually reminded me of the collaborative writing used by the children of the Barbiana school in Italy in the 60’s. Something very interesting about that process is described by don Lorenzo Milani in a letter to Mario Lodi. Here is my translation / adaptation from Italian:

Each kid has a very limited number of words that they use, and a very large number of words that they understand well, and whose value they know, but which would not come to their mouth easily. When they read aloud their 25 individual proposals, it always happens that one child (not always the older) has by chance guessed a particularly good word, or turn of phrase. All those present (although they had not been able to find it at the time they were writing) suddenly understand that the word is the best, and they want it to be adopted in the unified text.
That is, the text is at the cultural level of these kids’ ears, not at the level of their pen or their mouth.

As a non-native English speaker, I can totally see that difference between the level of my ears (recognizing) and my mouth (expressing). This also reminds me of Vygotsky’s idea of the Zone of Proximal Development

Anyway… the most enjoyable part of our meeting came later. While we were experimenting with new ways to share the slides in LCL Chats, I was encouraged to fly across the screen like superman! We shared lots of laughter and then a very serious reflection on the value and importance of being silly together.

I hope you’ll also enjoy learning and laughing with peers!

Hahaha so much fun. I’ve always loved creating alongside others, that what if… and oooh I could…. exchange that elevates a work beyond the limit of one brain. Makes me think of ‘neural pathways go beyond your body and are shared with your community’ concept that really struck me at the St Thomas hosted Playfest (I think it was the second one where Exploratorium folks facilitated the shadow play workshop.) 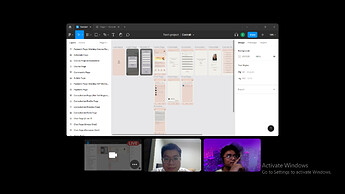 We basically discuss about how’s my project currently what should I add/remove and many more.
We really enjoyed in brainstorming our idea, and try to make it closer to perfect UI for mobile application.

…shared a sketch you can play here, as think you can kinda ‘see’ just how much I loved making this! : D

A web editor for p5.js, a JavaScript library with the goal of making coding accessible to artists, designers, educators, and beginners.

So wondering if there are others in LCL who would like to meet up to ‘show and tell’ some of our sketches, and play around with ideas in p5js together ?
Thinking maybe @Joanne, Nick @mcintyre, @Derval and some others here, might be interested in this.
If so, message me

, and maybe we can arrange a video-call together : D

thanks for translating and sharing the letter, Carmelo! And as a non-native English speaker myself, I relate to your experience about sometimes not being able to express oneself precisely as one would like. However I now find it can happen to me when I speak Russian, too. So sometimes I’m in a language limbo–not remembering how to say it in Russian and not knowing how to say it in English

. I appreciate you mentioning Vygotsky, too. I sometimes reread some of his and his students’ work (Bozhovich, Galperin)

I would love to hear feedback and other points of view regarding what I have planned for Scratch Week! It is my first time celebrating this event!

As I work with very young children I thought it would be interesting to create an unplugged collaborative mixed media piece with painting, collage and drawing materials, having one big piece of paper as the base. The paper will travel to 7 different groups/classrooms.

After that, I will make 7 copies of the final work and gift one copy to each group, and then invite them to create a remix of it.

I have no idea what will happen in the end, but hopefully we will have one matrix that was created as a collective piece, and 7 other pieces that connect to the first, but are different in their own way.

Have you had simmilar experiences, with Scratch related proposals in non digital form?
What do you have planned for Scratch Week?

@JayElf Thank you for sharing your sketch! I am interested.

I have been very absent from this forum this week, to Scratch as well. I missed the wescratch chat this week too. And yet, I was busy with the P of this week: Peers.
In our programme we are working with partners ( among others, university lecturers) to redevelop existing certificate and diploma courses for head teachers and school based mentors. We want to convert them to blended programmes and give them more focus, make them more meaningful. The last few days we sat for the first time together with this task team development to collaboratively develop an outline while jointly learning through the process. Next steps will be blue printing and story boarding etc. This workshop was combining many Ps. Collaborative development, creating that sense of community, finding the passion, … I kept the 4Cs mentioned in the reading shared (catalyst, connector, consultant, collaborator) in mind while facilitating the process.

Hi ClaudiaEBD. Maybe this can help: we did an unplugged activity for ECE: check this post for some pictures (here done with adults): [Activity 2] Make Something! - #38 by Lieve

I meet up with my friends through Discord. We talk how we’re doing. After that, we discuss how’s my Scratch project I’ve been submitted to the Learning Creative Learning and how to improvize it. We also enjoyed this because we’ve been barely doing voice call since several months ago and my friends also finds Scratch exciting and wants to learn about it.

that sounds lovely, @pein
catching-up with friends and bonding through Scratch too

Hello, Lieve! I saw it when you first posted it, and the idea is practical and wonderful!
I think it wouldn’t work with my 1-2 year olds but what a great way of introducing coding!

As are you my dear friend. Maybe I’ll have to write a poem called
Jenny Rhymes with Joy